Should you Vote NO for Heather Jobe???

I’m not going to try to tell you what to think, but I have to get this off my chest:

Something doesn’t add up!!!

If you have any interest in election integrity, please watch these videos:

What do you think?

Listen to Heather Jobe say in Washington the “elections are secure” and that “Your elections are SAFE.” (42sec)

Listen to Heather Jobe tell everyone that mail-in ballots are timely, efficient and secure. (30sec)

Which brings me to this:

The Progressive Connections of Heather Jobe

“An apple doesn’t fall too far from the tree.”

HERE’S THE PROOF THAT HPU HAS DEEP PROGRESSIVE CONNECTIONS:

Notably, Eugene Sullivan, who is a trustee of Hawaii Pacific University, is the first open connection to International Law, including his firms investigation of international money laundering and misconduct in presidential elections, as well as defending pharmaceutical and media companies against prosecution.  He and his associate Sean Freeh studied at the liberal Georgetown University school of Foreign Service, which has deep ties to the Democrat party, including being chaired by the late Madeleine Albright, who was awarded the Presidential Medal of Freedom by Obama, and was also an ambassador to the globalist United Nations. There are also several ties to Columbia University and London School of Economics.

HERE’S THE PROOF THAT THIS LAW FIRM HAS DEEP PROGRESSIVE CONNECTIONS:

Lyle Hosoda is democrat who supports progressive democrat campaigns. Digging into this reveal the following connections:

SUMMARY: Hawaii democrats have deep ties to national politics and the progressive agenda.

HERE’S THE PROOF THAT THIS FIRM ALSO HAS DEEP PROGRESSIVE CONNECTIONS:

Robbie and Matthai are deeply connected to the Los Angeles law scene. James Robie was known for defending insurance companies against big claims. Edith Mathai is somewhat of a rockstar and has made a name for herself defending judges and attorneys that find themselves in trouble (including Michael Avenatti):

SUMMARY: Robie & Matthai has deep connections to the Democrat party and the progressive agenda.

Before digging into this phase of Heather Jobe’s career, I want to point out the steady connection with and close proximity to progressive politics. These are not just casual, hard-working, blue collar Democrat connections. These are heavily funded national and international connections between the Democrat party and the broader global progressive agenda, which have been major influences on Heather Jobe’s life.

From liberal Hawaii to liberal L.A., and now to liberal Seattle, what do we know about Rafel Law Group?

SUMMARY: The Rafel Law Group ALSO has deep ties to the Democrat party and the global progressive agenda, including ideological connections with the WEF and the UN Sustainable Development goals. These are all socialist organizations that are using Marxist tactics, which includes language with a “hidden, higher meaning and socialistic interpretation.” Keep this in mind when researching.

THIS IS WHERE THE PLOT THICKENS:

The last place Heather Jobe worked before working for Klickitat County was for Joel Junker & Associates, which is a law firm that specializes in international trade. This firm merged into Junker & Nachachi in 2014.

Thus, Heather Jobe’s association with this law firm also has deep connections to the progressive agenda.

TO UNDERSTAND THE LEFTIST INDOCTRINATION IN LAW SCHOOLS:

“…Three years of law school, in Kennedy’s account, amounts to indoctrination of law students to take their place serving elite power in American society … to advocate for progressive causes. … The cluster of familiar liberal positions includes gay rights, abortion rights, gun control, free speech, affirmative action, open immigration policies, universal health care, higher taxes on the rich, unemployment benefits, a decent minimum wage, rights for criminal defendants, a social safety net for the poor and elderly, better schools in poor districts, equal access to opportunities, protection for unions, equal pay for women, environmental protection, human rights, corporate regulation, legal services for the poor, and a host of other positions that tend to be associated with the Democratic Party. Many law professors hold some combination of these views. A study found that substantially higher percentages of professors on law faculties contribute to the Democratic Party than the Republican Party.” SOURCE.

TO UNDERSTAND THE LEFT-LEANING STANCE OF CALIFORNIA WESTERN SCHOOL OF LAW:

According to an in-depth analysis of law schools by University of Chicago, CWSL is on par with the University of San Francisco, sitting Left of Yale, Stanford, or even Columbia University. SOURCE.

TO UNDERSTAND THE PREDOMINANT THINKING IN INTERNATIONAL LAW:

SUMMARY: Though Joel Junker supported Republican candidates, there are still deep progressive connections within both his education and his professional network. The globalist mindset is pervasive throughout multinational corporations, just as progressive politics permeate international law schools and associated firms.

In every case, Heather Jobe has been in close contact with people who have deep connections to the Democrat party and the progressive agenda. Democrats, liberals, progressives, socialists, radicals—whatever label they go by—all operate on the mantra that the “ends justify the means.” They deploy deceitful tactics, including lying and using language that has a hidden meaning (straight out of the Communist Manifesto), to subversively achieve their goals.

Based on personal observations and the content of this report, I speculate Heather Jobe is not the conservative candidate that she claims to be. Instead, it seems within reason to consider the possibility that she may in fact be a subversive progressive agent. THIS IS MY PERSONAL SPECULATION. 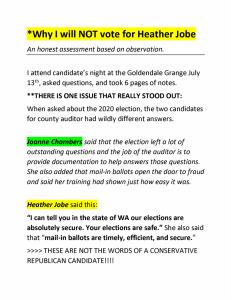 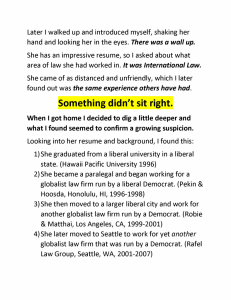 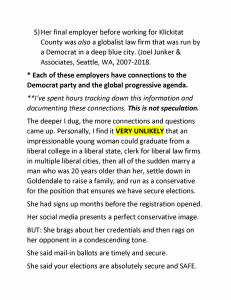 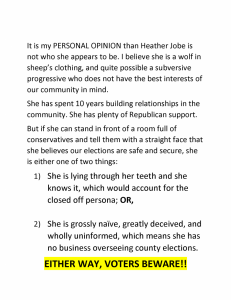 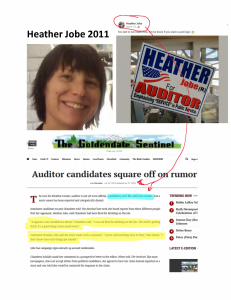 Spread the love
Something is Not Right With This What choices do we still have?

We Are Not Along