I’m From the Government, I’m Here to Help

This is one of my all time favorite quotes: 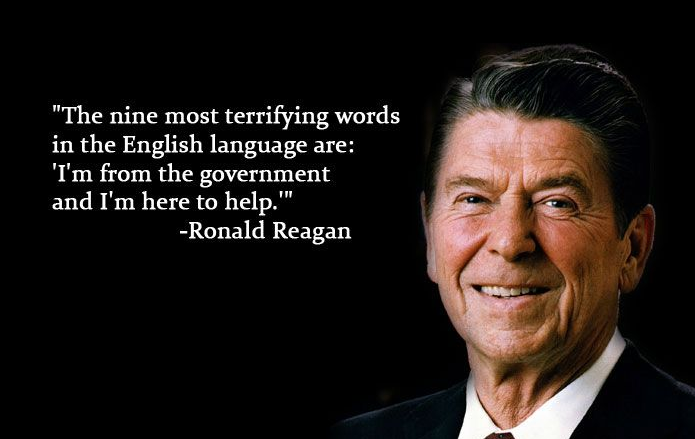 Why do you think these nine little words are so terrifying? Keep in mind this not some radical fringe right-wing extremist, this perspective is being presented by one of America’s most beloved presidents. What do you think Reagan was trying to warn us about? What could go wrong, if all the government is trying to do is step in and help?

“I’m from the government and I’m here to help.”

The inspectors’ intentions were pure, I’m sure. They were on site because somewhere in this vast country, four babies got sick and two of the died. The babies could have died from tainted formula made by Abbot Nutrition. While it’s difficult to grasp why these four cases of “rare bacterial illness” were immediately linked to this Michigan facility, the government wasted no time in shutting the place down and forcing a national recall–so as to keep people safe while the inspectors searched for the invisible enemy.

That is an example of the Precautionary Principle. More on that in a bit.

With all the hungry babies and desperate mothers out there, one might assumed the government inspectors must have found a boat load of rare bacteria at Abbott Nutrition. But did they? It turns out, not so much. The Hill reports the following:

“The facility has been shuttered for more than three months while the FDA investigated whether powdered formula from the plant caused four babies to contract a rare bacterial illness. …the FDA has not been able to definitively link its formula to the illnesses.“

Well that was helpful. The facility was shuttered for three months and they found no link to the illnesses. So as not to turn up empty handed, the government inspectors claim they did find “unsanitary conditions” at the plant. More specifically, they found the common bacteria Cronobacter in the facility, after swabbing the space between some duct tape and the floor.

The term Cronobacter roughly translates as “child eating” bacteria, named after Cronos from Greek mythology, but this new label wasn’t used 2008. Ultimately, the World Health Organization admits this common bacteria is found throughout the environment, “and thus ultimately the risk of illness associated with this product, is going to be based on a set of assumptions.”

So the risk of illness is based on assumptions rather than science — how convenient.

Let’s not lose sight of the fact the WHO has been waging a war on baby formula since at least the 1980’s, claiming in the 1981 International Code of Marketing of Breast-Milk Substitutes that governments around the globe have an obligation to protect mothers from “factors that inhibit breastfeeding.” Why does international government have this strange obsession with breast feeding? The report will give you all kinds of valid reasons, but I believe the real intent is found in this statement:

“There is an important relationship between breast-feeding and child-spacing.”

What we have found is motive and method. Slow population growth by regulating baby formula. Furthermore, learned in Ep. 115 – The Convergence & Coming Collapse that the WHO envisions “a world in which all sectors of society are protected from the inappropriate and unethical marketing of breast-milk substitutes,” and that their target date is 2025.

We also discussed how pain is a powerful tool to reshape human behavior. Thus, the government may inflict a little pain in order to encourage us to comply. After all, they don’t have to listen the wailing cries of hungry babies. They just have to make sure the world falls in line with they think is best — because that’s what’s best for the greater good.

Putting it all together, we find global government has an agenda to discourage the use of baby formula, the federal government has preemptively shutdown baby formula manufacturing while inspectors search for a ubiquitous bacteria, the private company voluntarily recalling the goods, hungry babies harassing their mothers, who then harass their elected representatives, who then call for the government to fix the problem.

Create the problem. Provide the solution. It’s a simple and effective strategy that reliably justifies greater government regulation, which in turn demands more government oversight and expands government spending, thereby providing the beast of bureaucracy a predictable meal. This parasitic cycle is greatly empowered by the Precautionary Principle.

According to the Encyclopedia Britannica, the Precautionary Principle (PP) legitimizes the adoption of preventative measures to address potential risks to the public or the environment. It turns out this principle originated from environmental law in the 1970s-80s — the same exact time frame as the WHO’s assault on baby formula and a whole slue of other seldom heard of international regulations. Put more directly, from ScienceDirect.com we find this straight forward definition:

“The precautionary principle is a cost-effective way to minimize pollution and environmental damage.”

Not without its critics, the Precautionary Principle has been called incoherent, unprincipled, and even dangerous, as it drives government policies based on nothing more than the assumption of risk. No science backing is needed. In fact, just the opposite, the PP is applied precisely when science cannot ascertain the impact of certain potentialities. Rather than wait for science to validate their theories, radical environmentalists created the Precautionary Principle to drive their agenda based on their own assumptions.

For decades this approach has worked so well, it was only a matter of time before it became more broader applied in other sectors. The process works like this: 1) Assume an inherent risk. 2) Declare the inherent risk. 3) Regulate the inherent risk. Thus, the assumed risk can be mitigated by more government regulation, whether the risk was ever real or not.

It works for baby formula. It works for coronaviruses. It works for Bird Flu. It works for pretty much anything the government wants to take control of — even regulating every aspect of human behavior for the entire whole of humanity.

That is why the wise shutter at the words, “I’m from the government and I’m here to help.”

We Are Not Along